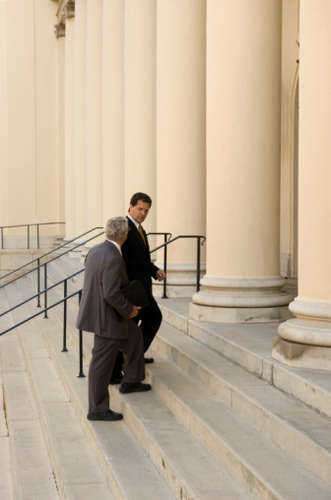 In the United States, pedestrians often cross roads and in doing so, they may come into the way of motor vehicles traveling on the road. While In many places pedestrians are left to cross safely by themselves after observing the road and crossing only when they know traffic will threaten them, many busier cities often provide pedestrian crossings, where pedestrians are expected to cross.
The appearance of pedestrian crossings can greatly vary, but the two most common crosswalk designations for pedestrians are either a series of parallel white stripes on the ground or two long white lines horizontal to each other. The former of the two is typically preferred, since it stands out more much more conspicuously against the road’s dark pavement.
Other pedestrian crossings also have a traffic signal which makes vehicles stop at regular intervals in order to allow pedestrians to cross the street. Others have “intelligent” signals, where pedestrians can push a button, which results in the traffic signal will schedule a stop in order to allow pedestrians to cross. Pedestrian crossings that do not have traffic signals are also very common. In this situation, the laws usually say that pedestrians have the right of way if crossing, and motor vehicles must stop to allow the pedestrian to cross.
Pedestrians, Drivers, and the Right of Way
Certain jurisdictions forbid pedestrians from crossing the road at any point other than at crosswalks, which is called jaywalking. In other areas, pedestrians can have the right to cross where they choose to, and they also have the right of way over any vehicular traffic while crossing. Most crosswalks exist at all intersections which meet at nearly right angles, whether they have walk markings or not. Some states, like California, have pedestrian safety laws that require cars to stop for any pedestrians in both unmarked and marked crosswalks.
In most states, drivers have to wait only until the pedestrian has crossed the half of the crosswalk which the driver is driving on, after which he or she may proceed. However, some states, such as Utah, require the driver to wait the full time, for example in a school zone when the lights flashing are on, before he or she can proceed.
Types of Pedestrian Laws
Not only are there laws that look at the interaction between drivers and pedestrians, but there are also those that regulate pedestrian conduct. While each state has specific laws regarding both of these, all states have laws that consider the following issues:
• The way pedestrians must obey traffic control devices and traffic signals unless directed by a police or traffic officer.
• Drivers and bicyclists yielding or stopping to pedestrians at crosswalks.
• Where pedestrians must walk on roadways if sidewalks are not available.
• Drivers exercising care to avoid hitting a pedestrian.
• Pedestrians abruptly leaving a curve and moving into traffic.
• Pedestrians yielding to motor vehicles outside of intersections.